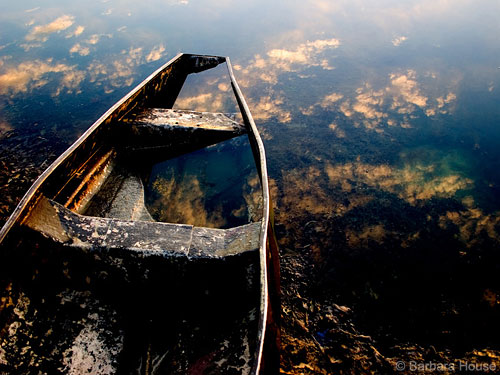 This color photograph won 1st Place Color in the Photographer’s Forum 27th Annual College Photography Contest. It was published in the magazine and also in the annual. I tried to place in these contests since 1989 and finally won. There were over 28,000 entries and 1000 colleges participated.

I had traveled half way around the world seeking subjects to photograph but found this shot in my home state in Northeast AR. This old work boat had a habit of leaking which created a perfect canvas for that morning’s sunrise reflection.

When I saw what was happening, I could barely breathe as I waited for the clouds reflection to float into the right spot. It was as if an old friend was sailing through the heavens.

The black and white version of this shot received a Merit Award in the Black and White Magazine Single Shot contest. It was published in the December 2009
issue of the magazine.

Just goes to show you you never know when that perfect shot is going to present itself.